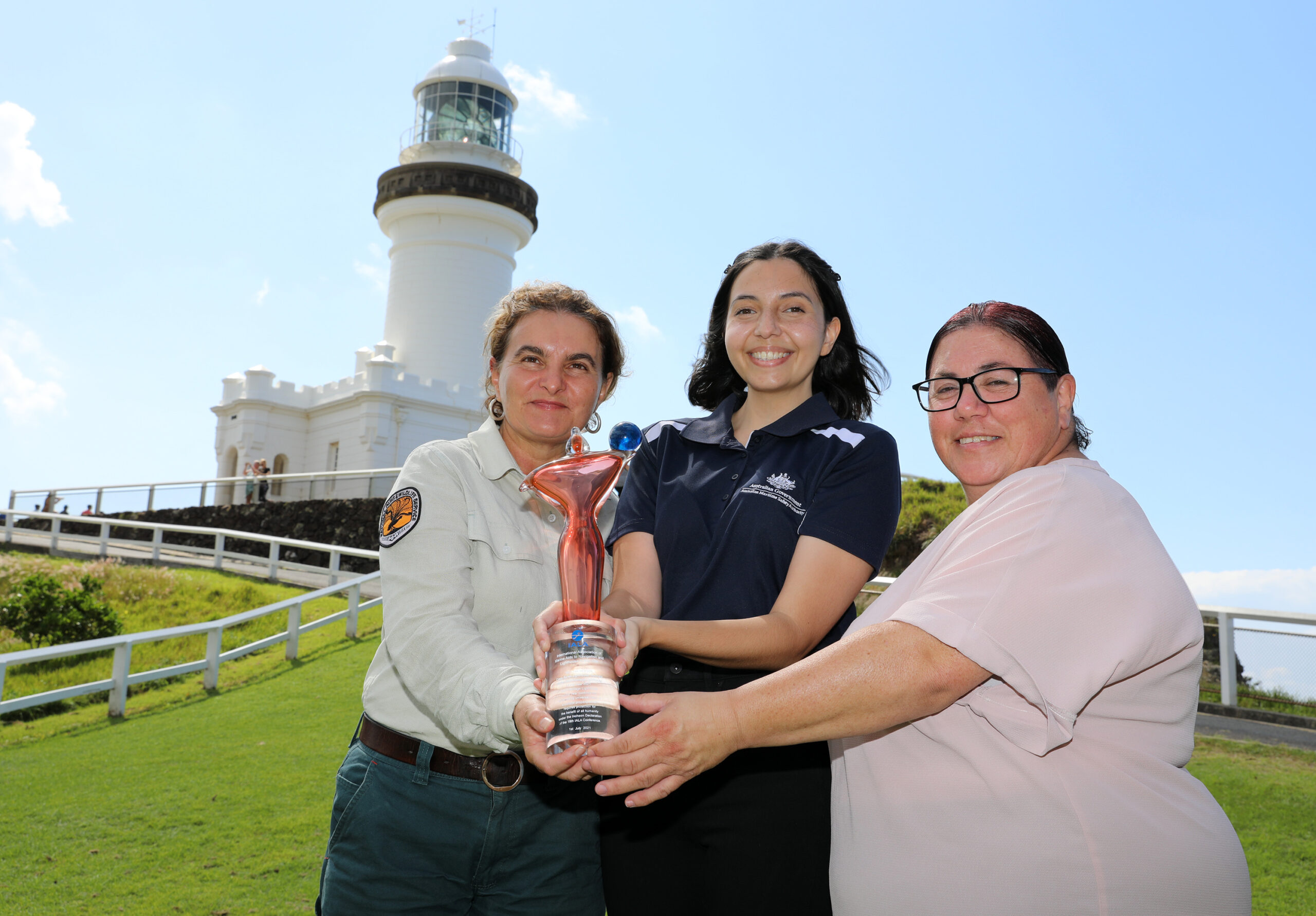 A prestigious international accolade was celebrated at Australia’s Byron Bay’s Cape Byron Lighthouse on 12 April 2022, after the iconic tower was named the 2021 Heritage Lighthouse of the Year by IALA.

IALA’s unique glass award, hand-crafted in the Republic of Korea, was presented by the Australian Maritime Safety Authority (AMSA), which operates the lighthouse, to the NSW National Parks and Wildlife Service (NPWS), which manages the light station and museum.

The Cape Byron Lighthouse received the global heritage accolade last July (2021) for its rarity, aesthetic characteristics, cultural significance, architecture and strong connection to the local community.  However, the presentation ceremony was delayed due to Covid restrictions.

Located on a towering headland on Australia’s most eastern point and surrounded by coastal beaches, Cape Byron Lighthouse – the nation’s most powerful aid to navigation (2.2 million candelas) – has proudly stood over Byron Bay as a local landmark for more than 120 years.

First opened in 1901, the lighthouse was significant in the establishment of aids to navigation on the New South Wales coast and is important for its association with coastal shipping over more than a century.

AMSA’s Heritage Coordinator Sarah-Jane Lakshman said the historic lighthouse remained an important part of Australia’s aids to navigation assets, especially along the east coast, and a symbolic landmark for the local community.

Ms Lakshman said: ‘Cape Byron Lighthouse continues to be as a vital aid to navigation for mariners at sea after 120 years, using much of the original equipment and technology of the early 20th century.

‘AMSA is delighted to present this prestigious award along with the NSW National Parks and Wildlife Service and celebrate our long-standing partnership and highlight Cape Byron’s important contribution to maritime safety.’

NPWS Tweed Byron Area Manager Jenny Atkins said the trophy would be on display at the Cape Byron Visitor Centre for the next twelve months so the local community can share in the celebration.

Atkins added: ‘We are excited to be part of this important celebration of the popular Cape Byron Lighthouse which is an important focal point for the local community.’

The historic Cape Byron lighthouse – including the popular museum inside – is regularly maintained and is one of Australia’s most-prized tourist destinations, attracting more than 500,000 visitors each year.  The lighthouse also re-opened for local tours at the end of April following a long delay due to Covid restrictions.