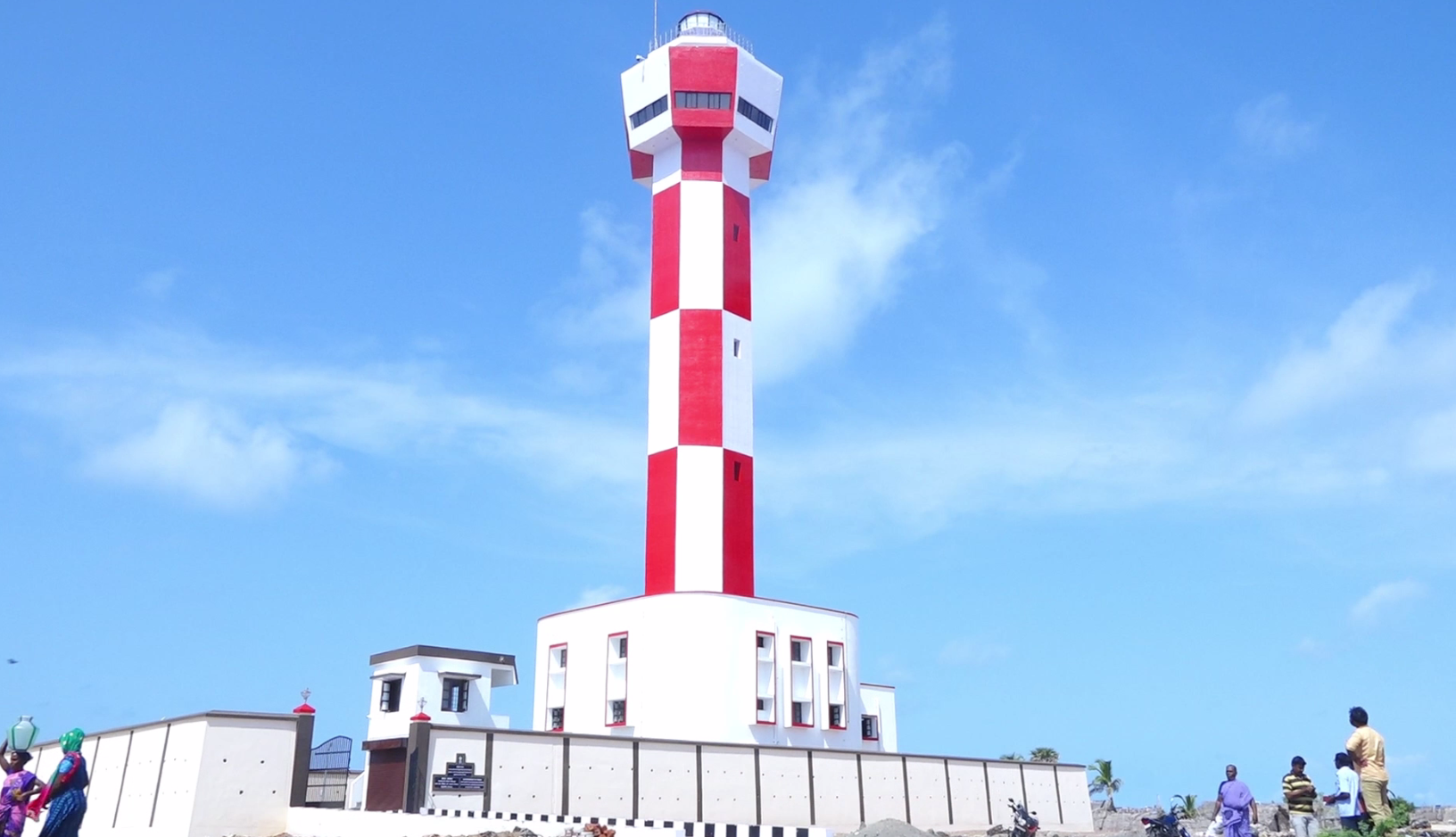 A new Lighthouse at Dhanushkodi has been established to fulfil the long-standing demand of the local fishermen and also to enjoy the aerial scenic beauty of Dhanushkodi, for tourists visiting from the various parts of the world.

Dhanushkodi was an ancient port for more than 200 to 300 years which can be understood from the records made in ancient history of Agananuru and also recorded by the ancient historian Marco Polo in his voyage evidences. Since the 15th century there was a daily boat service from Dhanushkodi to Thalaimanaru, Yazhpanam and Colombo in Sri Lanka.

The British Government introduced a train service from Chennai Egmore to Dhanushkodi and a ship service from Dhanushkodi to Thalaimannar, after constructing Pamban Railway Bridge in between Mandapam and Pamban of Rameswaram Island. The first passage of the Mail Boat train service was commenced on 24 February 1914.

On the golden jubilee year of the shipping service from Dhanushkodi to Thalaimannar in 1964, a heavy cyclone hit the Dhanushkodi Village at a speed of about 280 km per hour at midnight on 17 December. This huge cyclone left only the locomotive’s wheels of the mail train which had just entered into  Dhanushkodi from Rameswaram before the commencement of cyclone. Dhanushkodi village has been inundated and devastated totally. All the passengers of the mail boat lost their lives along with thousands of villagers from the Dhanushkodi Village.

All prominent buildings of Dhanushkodi such as at the harbour, the fisheries jetty, railway station, post office, custom office, hospital, temple, church and school were destroyed by the cyclone.

The Government declared the place uninhabitable. However, a fishing community of about 500 families are carrying on fishing activities on a day-to-day basis.

Now, the Indian Government extended the National Highway from Rameswaram to Arichal Munai at an estimated cost of Rs.65.68 lakhs and opened it for traffic on 27 July 2017.

In continuation to this, the State Government has provided a bus facility up to the Arichal Munai and also a post office has been opened at Dhanushkodi.

The Dhanushkodi Lighthouse stands at an elevation of 53metres above MSL and has a three metres diameter lantern installed atop the tower equipped with a 250mm revolving optic with LED as the main illuminant of 132 Watts having a character of 3 Group flash every 20 seconds. The range of light is 15 nautical miles. The lighthouse is sourced by 5KW solar power as per the Government of India’s Green energy initiative with backup generator supply.

The Dhanuskodi Lighthouse is flanked by the Palk Strait on one side and the Gulf of Mannar on the other. The lighthouse is highly beneficial for the activities of fisherfolk on both waters here for their safe passage towards Dhanuskodi.

around the island with a 360-degree view from the visitor gallery specially constructed for this purpose at 42 metres with a lift and binocular/telescope facility for viewing thus creating a destination for tourists and to further enhance the tourism potential of the island.