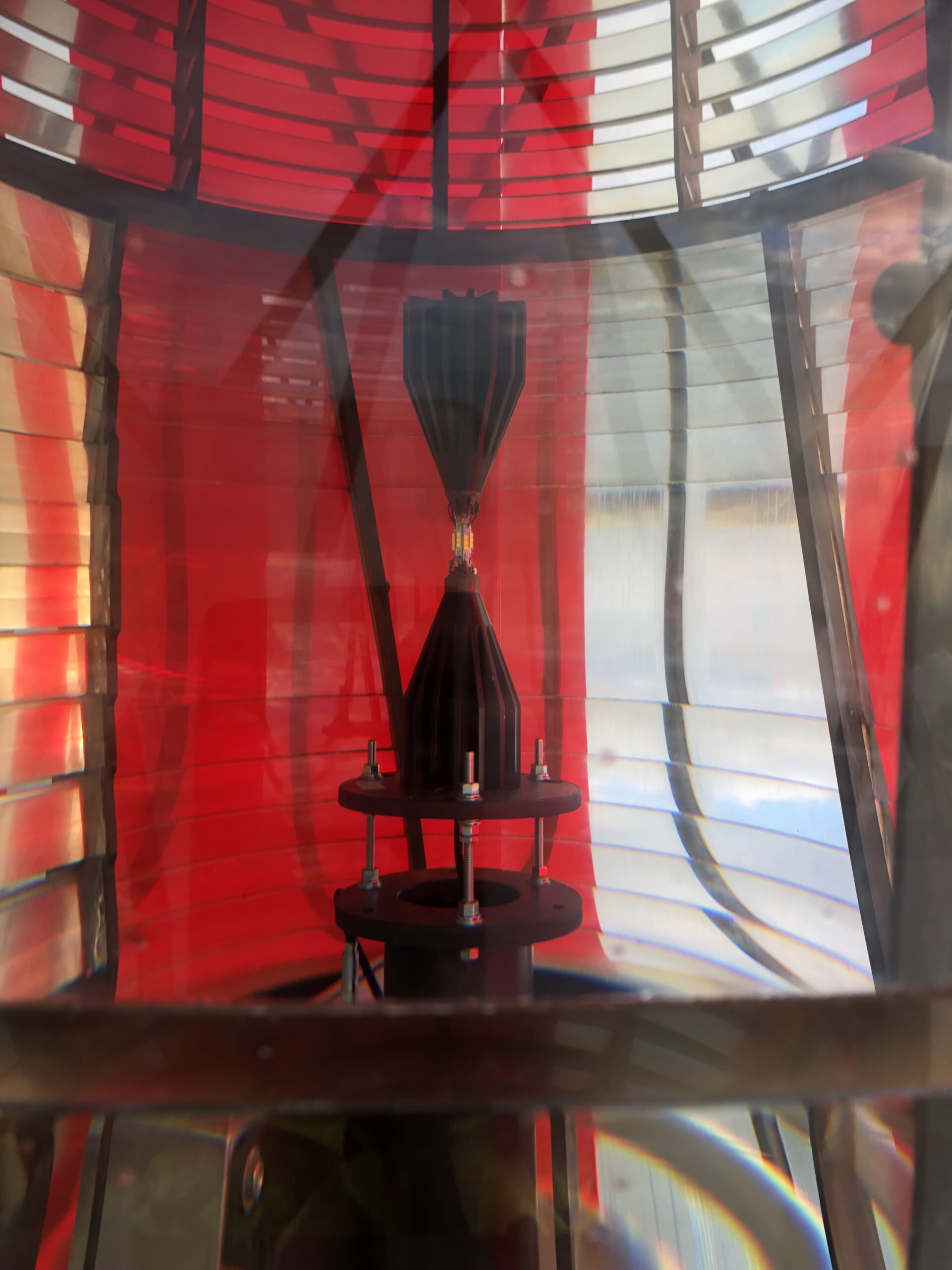 The St Tudwal’s Islands are a small archipelago about a kilometre east of the southern tip of the Llŷn Peninsula in North Wales. St Tudwal’s West measures just 650 metres long by 167 metres at its widest point and is a close neighbour of its sister island, St Tudwals East. At the pinnacle of the west island is St Tudwal’s lighthouse, a small yet important light not only to local traffic but also to the many maritime tourists who frequently visit the surrounding area of outstanding natural beauty throughout the year.

The lighthouse was first established in 1877 with the Chance Brothers 2nd order fixed optic being the first occulting apparatus made by the firm. Lighthouse keepers lived on the island in the adjoining building until an innovative acetylene sun valve system was installed, making the lighthouse fully automatic. Keepers no longer required to maintain the light, departed in 1922.

The sun valve was invented by Swedish lighthouse engineer Gustaf Dalén and was a simple concept; heating up and expanding with sunlight, isolating the gas and extinguishing the light until dusk when the valve cooled, opened, and the gas was lit and the light illuminated again. This system was so reliable that it remained in operation for over 70 years until the lighthouse was converted to electrical solar power in 1995.

All Trinity House lighthouses are regularly reviewed to identify potential risks to their continued operation and with the aids to navigation equipment being over 20 years old, it had reached its end of service life.

A modernisation project was initiated with design work and procurement of equipment and materials completed in 2020 and installation works scheduled for 2021. As with all locations, the local flora and fauna have to be taken into consideration with any potential impact discussed with the local authorities, in this instance Natural Resources Wales. The islands play host to breeding grey seals and a wide variety of birdlife including the rare chough. Careful planning was required to minimise disruptions to these important island visitors while maximising the best of the seasonal weather.

The new design includes the installation of an eight-sided LED light source, with half of the LEDs in operation and the remaining half forming the standby system which would operate in the event of a failure. An upgraded power system with increased efficiencies means that the station can be powered from just two large solar panels and twenty ‘car-size’ 12V gel batteries; a big reduction from what was previously fitted.

Mobilisation took place in April 2021 with the whole inventory of project tools and materials being flown by helicopter from THV Galatea to the island and carefully landed into the lighthouse gardens. Three huts were erected within the grounds to provide temporary storage and welfare facilities.

Installation was carried out over a few months using our Field Operations team with access to the island by local boat and a daily walk up and down the island, an excellent way to keep fit.

The new LED light source was installed inside the exiting optic and filter material replaced to ensure the red sectors remain within the IALA specification for a red navigation light. Other improvements were undertaken including surge protection, improved lighting, refurbishment of the WC and provision of a new portable generator.

Some minor works to the building fabric were completed including wall repairs and internal painting. Listed Building Consent was granted for a new internal handrail to improve safety on the original staircase; this was built and installed by a local blacksmith and designed to follow the curvature of the stairs and complement the original handrail.

The refurbished and modernised installation was commissioned in July 2021 and full external repainting followed by final testing enabled handover early in 2022.